You will be aware that for several years the Community Council has been working to improve broadband provision across Tweedsmuir. 18 months ago the Community Council secured funding from a combination of grants from the local windfarms alongside funding under the government gigabit vouchers scheme to progress with a Community Fibre Partnership Project. The project, in partnership with OpenReach, would provide high speed fibre broadband to all premises within the community.

Since securing this funding we have been trying to get OpenReach to issue the contract documents and commence works on the project. Unfortunately, Openreach have been less than helpful. Initially they insisted on re-surveying the whole project. This process took over a year and was only completed following the Community Council’s complaint to the CEO of BT Group.

It then took a further 6 months for a new contract price to be provided. During this time the Community Council has continued to try to engage with Openreach and pressurise them into action.

Following the issue of the revised price, OpenReach then informed us that they had been awarded the contract for works on the Scottish Government R100 project covering the south of Scotland, including Tweedsmuir. They also informed us, that as the community was now covered by this project, we are no longer eligible for funding through the UK government gigabit voucher scheme. Consequently, the community fibre project could not go ahead.

This is very disappointing. Whilst the good news is that under the R100 project, Tweedsmuir will be provided with “fibre to the home”, it is likely to be at least another 12-18 months before the work is completed.

Ongoing complaints from the Community Council

The Community Council is still pursuing our complaints and concerns regarding the behavior and performance of Openreach. We have raised these issues with our local SBC Councillors and MP, who have been supportive, with the Scottish Government R100 project team and with OFCOM, the communications regulator.

The Council will continue to pursue our complaints regarding OpenReach and explore any other options to try and bring forward the works to enable improvements to broadband for the community.

This site uses Akismet to reduce spam. Learn how your comment data is processed.

Notice is hereby given that the AGM of Tweedsmuir Village Hall will be held on Thursday, 19th May at 7:00 PM. The event will take place in the Village Hall. If any local residents wish Read more… 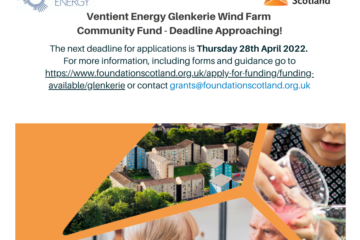 Below are the dates for funding applications to the Ventient Energy Glenkerie Windfarm Community Panel. The next round of applications closes on 28th April. You don’t need to be a registered charity to apply. If Read more… 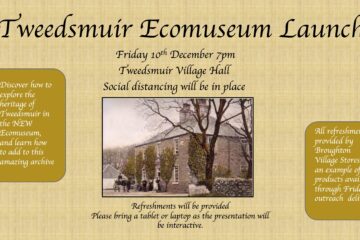 The Tweedsmuir Ecomuseum will be formally launched on the 10th December – and there are now over 400 entries in the system, which have been entered by volunteers. You will be hearing the word “ecomuseum” a Read more…